If you’re looking for a good tactical knife, you won’t find it in your grandma’s kitchen nor your grandpa’s pocket. Although sturdy and portable, a tactical knife isn’t made for peeling apples or whittling wood. Instead, tac knives are made for easy concealment, quick deployment, razor sharp slicing, and punching penetration. Benchmade is one of the most respected knife manufacturers in the world. The Benchmade Infidel series features a line-up of some of the best tactical knives on the market. Not your typical EDC knives, the Infidel series is built for battle.

Infidel knives are the perfect combination of Benchmade’s legendary craftsmanship and modern tactical design. Although targeted at military personnel and law enforcement officers who need a sharp blade with major intimidation factor, these blades will also give knife enthusiasts a serious buzz for the same reason.


The Benchmade Infidel Series - The Ultimate in OTF Knives

First introduced in 2006, the Benchmade Infidel series quickly piqued the interest of military personnel, police officers, and first responders who needed blades that could be deployed quickly, easily, and safely. No one wants to fumble with a folding knife while trying to keep the bad guys at bay. Likewise, slicing through a seat belt to save someone’s life also requires instant access to a surgically sharp cutting tool.

Each blade in the Benchmade Infidel series is a highly effective tool and weapon. However, the market for these blades is somewhat limited due to legal restrictions on OTF (Out the Front) knives. Many states prohibit the sale of OTF knives, and most have laws against carrying them, especially for carrying them concealed.

Despite the legal limitations, OTF knives have a dedicated fan base. These unique, but effective weapons deploy the blade automatically through a hole in one end of the handle when a “switch” is pressed. Infidel knives are dual action OTFs, meaning the switch both deploys and retracts the double-edged blade.

OTF knives (especially those in Benchmade’s Infidel line-up) get extra points in the badass department just for the way they open. The audible “switch” sound and the immediate appearance of a razor-sharp blade is enough to turn heads whether you’re confronting thugs in some back alley or opening a package at your kid’s backyard birthday party.

Benchmade Infidel Dagger 3300-CON This is the most popular member of the Benchmade Infidel family. It features a 3.91-inch double-edged blade made from sturdy D-2 steel. With a Chromium content in the 11% to 13% range, D2 steel is considered “semi-stainless.” The blade has a thickness of 0.118 inches and holds an edge like there’s no tomorrow. You can choose between a BK1 tactical black-coated blade and an attractive satin steel finish.

The total length of the Infidel 3300-CON is 8.9 inches and it weighs about 5 ounces total. The handle measures 4.8 inches and is made of black machined 6061 T-6 aluminum. Offering great balance in the hand, the blade to handle ratio is as close to perfect as you’ll find on a factory-made knife.

No matter how you slice it, this blade is definitely made for stabbing. It ruthlessly punches through tough barriers and slices on the way in and on the way out. The rock solid three point retention system prevents excessive blade play, keeping it secure even during rough use. This sturdy construction makes the Infidel more practical than many OTF knives. In a pinch, the blade can be used for everyday tasks, although it probably isn’t the best tool for the job.

The Infidel 3300-CON has a removable pocket clip hard-wired to the back side. This durable clip lets the knife sit low and deep in your pants pocket and allows you to carry your OTF blade just like you would an everyday pocket knife.

While all these features are impressive, the locking mechanism is where every knife in the Infidel series really shines. While the double lock action is meant to cause severe damage to hostile threats, it is also an integral safety feature that keeps the blade from accidentally deploying in your pocket. Notches on both sides of the deployment slot make the blade easy to extend whether you are right-handed or left-handed. These notches make Infidel knives truly ambidextrous.   Benchmade Mini Infidel Dagger 3350 The Mini Infidel is a slightly smaller version of the 3300-CON. Measuring just over 7 inches from base to point, the Mini has a 3.1-inch blade with a thickness of .09 inches. This size is small enough to fit easily in your pocket, yet large enough to sit firmly in the palm of your hand. 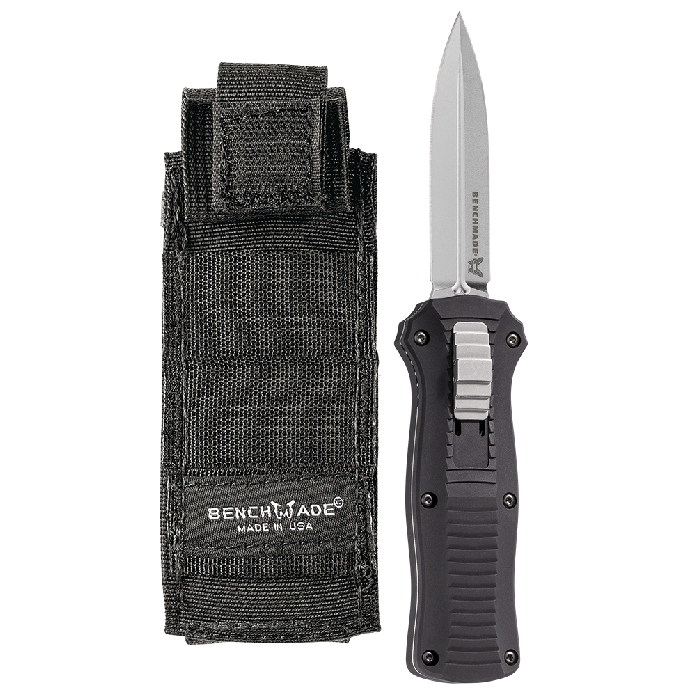 The Mini Infidel has all the same great features you see on the full-size Infidel, including the double lock action, D2 steel blade, ambidextrous functioning, and handy pocket clip.

Benchmade Infidel Single Edge 3310 Knife enthusiasts everywhere were disappointed when Benchmade stopped production on this member of the Infidel series. This double action, out-the-front automatic knife features a tough S30V premium stainless steel drop point blade rather. This is in contrast to the double-edge dagger-style blade on other members of the Infidel series.

While still retaining the cool factor of the OTF function, the Infidel 3310 had a more utilitarian drop point design, which made it better suited for everyday tasks like opening packages and sharpening pencils. However, this knife still shines as a tactical blade.

Benchmade Infidel 3300BK-1901 This limited edition blade (only 3000 were produced by Benchmade) takes all the features of the regular Infidel 3300-CON and ramps them up a notch. The most noticeable upgrade is the black DLC coated S30V stainless steel dagger blade. The toughness, corrosion resistance, and edge-holding ability of this high-quality steel is unmatched.

Benchmade also improved the handle on this 3300BK-1901 Infidel top-of-the-line tactical knife. While still made from 6061 T-6 billet aluminum, the handgrip features an attractive burnt bronze anodization, as well as a black oxide release button and liners. Not only is this thing deadly in the hand, it’s also stunningly attractive. In a rugged and tactical way, of course. Check out more specs here. 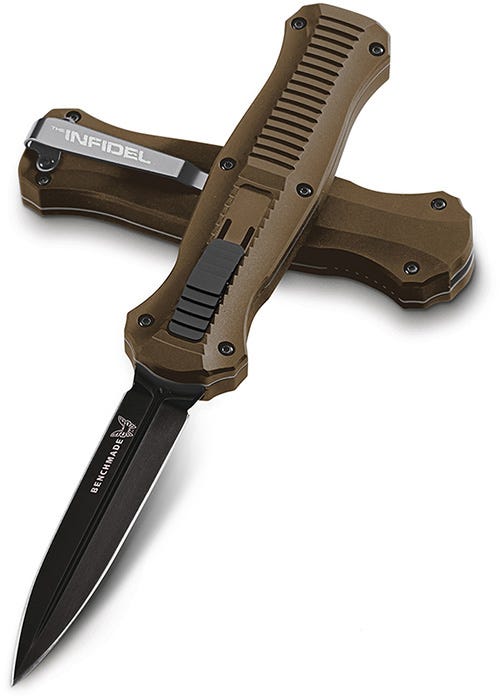 Every knife in the Benchmade Infidel series is a high-quality, top-shelf offering, especially in the realm of OTF blades. They are all compact, formidable, and potentially deadly. With the Benchmade name, these knives carry serious prestige. However, the Infidel series also packs a certain cool factor that other knives have a hard time mustering.

Any of these tactical knives are sure to impress your buddies. However, if you really want to turn them several shades of envious green, the limited edition Benchmade Infidel 3300BK-1901 is a surefire way to do just that.